As I write this we have less than two months left of our Peace Corps service.  In fact we have already purchased our tickets to return home.  We will be flying out of Botswana at 4:20 pm on May 8th.  (Edited to add:  Due to an illness at home we were able to push our COS up a few weeks and we actually left Botswana on April 11th)

The end of a Volunteer’s two year Peace Corps commitment is called COS (Close of Service).  We use the acronym “COS” both as a noun or as a verb.  Examples:  Noun:  Tish’s COS is coming up soon.  Verb:  Marion will COS soon.

The word COS is like the word “Christmas” or  “Retirement”.  It is a word that just makes you feel excited and good.  It is something to be looked forward to.  The word “COS” is rich in meaning to us:

Being at the very end of things means we need to concentrate on finishing up projects, and turning over projects.  We should not start new ones.

Recently I had to back out of a project I had been planning to do for months because I just do not have enough remaining time here.  I had heard that Molefi Senior Secondary school had a small computer lab and I thought I might be of help there. I visited the school about three weeks ago.  The computer lab consisted of about 30 desktop PC’s for over 1,000 students, and one very overworked teacher.  I sat down with the teacher and we brainstormed how I could be most useful.  I went home and looked at my calendar and realized how few days I have left to work.  My calendar showed that of the weeks remaining some days were taken up with Regional meetings, some were taken with our COS conference, three separate weeks were taken up with leave days I either take or lose, and many days are taken up for trips to Gabs for Peace Corps Medical (related to COS).  So I decided I just can’t take on that project.  Not enough time left.

For an example of finishing or turning over projects I can look at my work at Mochudi Public Library.  I have been teaching employees and patrons of the library how to use the computer.  That project has blown up into something really big.  What started with me and one other intern teaching four or five persons each day; has now turned into a much larger project.  The library director asked Stepping Stones International if we could use the computers at the Leadership Center and so now the Tues and Thurs training is for 40 or 50 persons instead of four or five, and we have four other interns sharing the teaching duties.  This project is completely sustainable — I can bow out now and the interns do the teaching.  I am sort of out of a job.  That is the way it is supposed to work at close of service.

During the last two months we are supposed to stay in our village and work on the transition out of here.  They also keep us busy with various COS tasks.  We have a lot of things to turn in that were issued to us at the beginning of our service, such as our Setswana dictionary, water filter, mosquito nets, medical kit, etc.  I have one last VAC meeting to attend at the end of March.  And of course there are a lot of trips to medical to be poked and prodded.  They want to send us home as healthy or healthier than we were when we arrived here.

Another thing that happens near the end of service is that Peace Corps Volunteers attend their COS Conference.  Our COS Conference was held in Nata at the Pelican Lodge.  The lodge was nice and we learned some valuable information on closing out our service, saying goodbye in our village, transitioning to a continuation health coverage policy, and the business of leaving the Peace Corps and rejoining the real world.  One night we all went for a nice dinner next to the Makgadikgadi Pans. 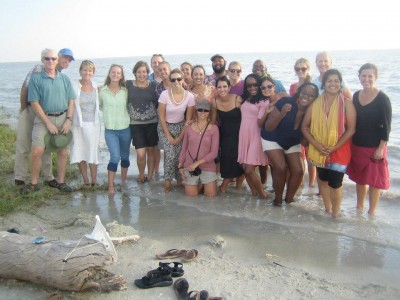 The above picture looks like we are standing on a beach.  Normally you would see a huge dry salt pan behind us but because we just had a rainy season the pans are flooded to a depth of about three feet, creating a temporary shallow lake that is about 42 kilometers across.

Just being at the COS Conference itself was for me a very moving and symbolic event.  We had worked so hard to just get into the Peace Corps, and then served here in Botswana under sometimes harsh conditions — and now I could see the finish line.  We have almost completed this huge goal.  We are so very proud to have reached this milestone.  There were times when I did not think we would make it.  Tish thought about leaving the first year, and I considered it during the second year, but we hung in there, and here we are about two months from our COS date. 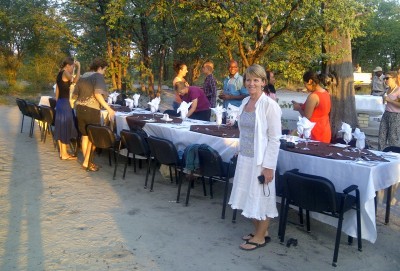 The COS Conference was only for our intake group, BOTS-10.  BOTS-10 started with 39 people at the JFK Airport in New York City and now we are down to 23.  I looked around at the others in our BOTS-10 family, and realize how much I care for each of them.  We have bonded through this experience and I will never forget them.  The COS conference would be the last time I would see some of them, perhaps forever, unless we get together in the USA.  There were a lot of hugs and warm feelings on that last day.

What now?  Four years ago we gave a lot of thought and effort in getting in the Peace Corps; and two years ago we excitedly began our service.  But it is only in the last few months that we thought much about what comes next.  Since we sold our house before leaving Atlanta, we don’t have a home to return to.  We don’t even have a car.  We have some big changes ahead.

2 Responses to Wrapping Things Up