I turned 60 right before we left for Botswana.  During those 60 years I had only met two very minor “celebrities”.  The two I met were Howard Cosell and  O. J. Simpson (decades before his murder trial),  whom I met when I was very young.

Over the years I have met some people who were personal heroes of mine that would not mean much to most of you.  Highest on that list is Bill Booth, who is an accomplished engineer and inventor.  He turned his considerable engineering skills to making his hobby (and mine), skydiving, much safer.  He did so by inventing, among other things, the 3-ring safety release system, the throw-out pilot chute system, and the Sky-Hook RSL.  If at some point in your life you wanted to check “go skydiving”off of your bucket list, and did a tandem skydive, you can thank Bill Booth inventor of the tandem skydiving rig for that.  He revolutionized the sport for the rest of us who skydive and we revere him.  I met him at a skydiving boogie in North Carolina where he was demonstrating his Sky-Hook system.  I met him, got to try the Sky-Hook, I talked with him and even got him to sign my logbook.  A big day for me.

A funny story about Bill.  He owns and pilots a seaplane that was rented by Tom Cruise and used in the filming of The Firm.  Bill had a small part in the film, and took Tom to a nearby dropzone one day to go skydiving.  At the dropzone a young man nervously approached Bill and Tom asking for an autograph.  Tom Cruise assumed the young man was asking for his autograph, but it was Bill Booth’s autograph he wanted, he could not have cared less about Tom Cruise. 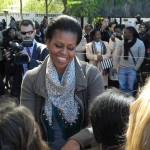 When we got to Botswana, to our great surprise we had the opportunity to meet celebrity after celebrity.  It started with he first lady, Michelle Obama.  She visited the counry just a few months after we arrived in Botswana and we were included in the group of approximately 50 Peace Corps volunteers who met with her.  It was a very quick meeting, she said a few words with a few of us, shook a few hands (mine included), took some pictures with us and that was that.  Still it was really memorable.  She is very tall, and beautiful, and has a lot of presence.  Even though I did not vote for her husband, it was a thrill meeting the first lady.  I wrote a blog entry about that day, click HERE to read it. 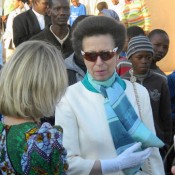 The next celebrity coming to Mochudi was Princess Anne of the British royal family here to visit Stepping Stones International where Tish works.  Because I know someone who works there I got to be there for the arrival of the Princess.  She is an interesting person.  She is the only member of the royal family ever to have competed in the olympics (1976 Montreal Olympic games – equestrian events).  She showed a lot of nerve in 1974 when someone tried to kidnap her.  Her driver, bodyguard, a policeman and a reporter who tried to intervene were all shot.  The kidnapper then told Anne to get out of the car, to which she replied: “Not bloody likely!”, she then dived out of the other side of the limousine and another passing pedestrian helped Anne get away from the scene. 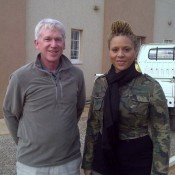 A month or two after meeting Princess Anne, Stepping Stones International hosted an American recording artist named Yewande who performed with the kids and taught them all about writing songs.  To be honest I had never heard of her, but I was told she was a celebrity, who am I to argue. 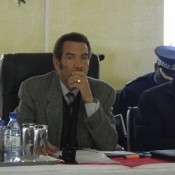 Botswana Ian Khama.  He came to Mochudi to visit the government workers and I sat in on the meeting.  Interesting guy, he is the son of the first president Sir Seretse Khama who is sort of the George Washington of Botswana.  President Ian Khama is a strong president in his own right as he demonstrated a little over a year ago when he faced down a strike by government workers. 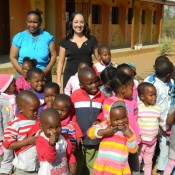 I had never met a US president or former president, until I came to Botswana.  A few weeks ago it was rumored that our fellow Bots-10 Peace Corps volunteer, Tija Danzig, was going to be visited at her NGO by former president George W. Bush and his wife Laura.  It was supposed to be a secret, but when the secret service pays you a visit there is a pretty good chance a big-time politician is not too many days behind.  I heard that there would be a small group of Volunteers selected to meet with them.  I was disappointed that I probably would not make the cut.

The group would include the extendees (the Volunteers who are in their 3rd or 4th year of service), and those from Texas (Bush’s home state).  Tija later told me that she knew I would love to meet Bush so she lobbied for ex-military Volunteers to be included too, just so I would be invited.  I love you Tija.  Tija knew I had served in the Air Force.  The plan worked.  I got a call from Tim Hartman, our country director on a Wednesday asking if I would like to come to Gabs the following day to meet with the former president — of course I could.

The next day I met with Tim, a few PC staff, and the group of Volunteers at the Peace Corps offices at noon.  Tim gave us the scoop on what was about to happen.  We learned that the correct protocol is to address our visitor as “Mr. President”.  Tim also told us that since we were part of the event, we were not supposed to pull out our cameras and take pictures.  Darn it… I had planned to do just that and get a picture shaking his hand or something. 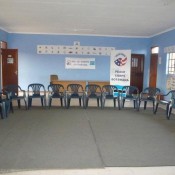 We got in vehicles and made the 30 minute ride to Gabane where Tija’s NGO is located.  The room where we were to meet was all fixed up and ready for us.  15 chairs in a semi-circle with a Peace Corps Botswana flag in the corner.  The plan was for President Bush and his wife to come into the room with us and stay for 15 or 20 minutes with no one else there.

I was really excited to meet President Bush.  I had voted for him and thought he did a good job.  Plus I just liked him.  He rode a mountain bike and regularly ran 3 miles in 21 minutes, how many heads of state can do that?  We had some things in common.  Finally, the procession of cars arrived and the President and his wife arrived.  Tim and Tija escorted them toward the building as we waited in our room, excitedly peering out the door and windows.  The President was entertained a bit by some traditional dancers, then they met some school officials, then they came toward us.  We quickly got back from the door and stood near our seats. 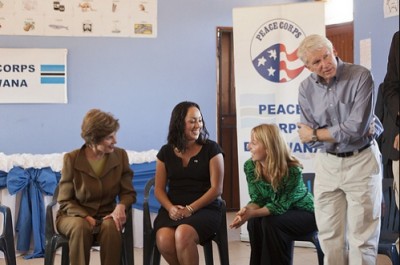 He and his wife first circled the room speaking to each of us in turn, asking us who we were and where we were from, and shook our hand.  Then we all sat down and Tim told the President a little about Peace Corps Botswana.  The president then told us what he was doing in Botswana, that he was in Botswana to kick off a PEPFAR program to combat cervical cancer in Botswana.  Then a volunteer from each of the four Volunteer job categories (NGO, DCL, CCB, and Life Skills) spoke of what they do in their village.  After that, we all just stood and mingled.

It felt very relaxed, like so many parties Tish and I have had at our home, where people just hang out and talk about whatever.  The only thing missing were drinks.  President Bush and his wife are so incredibly nice.  “Just plain folks” as the saying goes.  Very friendly and personable.  He seemed especially interested in talking to Tom Defayette and myself, the only “seniors” in the group.  He circled back to me several times asking me what it was like serving at this point in my life.  We talked and laughed, it was great.  Then it was over.

After meeting with the kids some they left.  The President walked away toward the vehicles with his arm around Tija, and her arm around his waiste.  They looked like old friends or a father and his daughter.

This was definitely the high point of my Peace Corps service in Botswana, and this will be my favorite celebrity story (much better than saying I met O. J. Simpson).

1 Response to The day I Met President George W. Bush