It is Saturday afternoon.  As I write this, a woman named Kebatlhaole Oarabile is in the hallway next to a bucket on her knees wringing out a rag.  Nono, as I call her, is cleaning our tile floor by hand.  She has already swept and dusted the entire house, and cleaned the tile floor of two of the bedrooms; she will be doing the other guest room when she is through with the hall.  After that, she will clean the living room, kitchen and bathrooms.  She has been here since 7:30 am and it is now 12:30.  Five hours, and she is a little more than half done.  For all this I will pay her 150 pula when she leaves.  Plus, I provided her with the makings for her lunch (a peanut butter & jelly sandwich).  150 Pula is about equal to $20.

We have never had a maid before, neither here nor back in the states.  Back in Georgia, Tish said she didn’t need one, and she did not.  Tish (with a teeny bit of help from me) kept our 4,000 square foot house spotless.  Our current house in Mochudi is probably less than 1,000 square feet.  We don’t really need a maid, but I wanted to hire Nono to clean our house once or twice a month — as a way of helping her.

I have been asked for money a lot in the street.   I must have heard kids and adults ask, “Can I have 5 Pula”, a thousand times here and in Kanye when we first arrived in Botswana.  Those are just the people who assume we are rich and a soft touch because we are Lekgoa (white).  Sometimes I have been asked for money by co-workers.  I was asked for lunch money by one of our interns, and our previous cleaner asked me once — I did not give to either.  Tish tells me she gets asked for money and sweets by the kids at Stepping Stones fairly regularly.  She has gotten into the habit of putting small Peanut & Raison snacks in her backpack and giving them that instead of one or two pula they would probably spend on sweets.

As a Christian, I recall the bible passage in which Jesus said,

With those verses ringing in my head, and knowing I have thousands of Pula in the bank and a fat bank account back home, it seems wrong for me to not give to people especially if I know they are genuinely needy.  So my approach now is to give to people who obviously truly need help, like the elderly lady who sits outside of the Spar grocery store and has something wrong with her leg; and to NOT give to those who obviously don’t need it like the multitude of healthy kids who ask for five pula as we walk by. 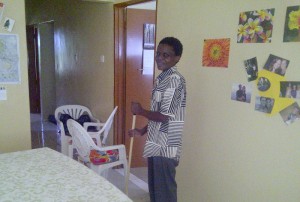 Which brings me to Nono. I first got to know Nono when she was hired to be the “cleaner” for our office.  In America we call them janitors. She was on an eight month contract that just ended March 31st.  Prior to getting the temporary job in our office she was unemployeed, and she has no prospects of employment now that her contract is up.  Before her contract ended my office was paying Nono 1,300 Pula per month (approx $180).  After she paid her rent which is 500 Pula, she tried to stretch the remaining 800 Pula enough to feed herself and four children, pay for water and electricity, and pay for transportation for her children to go to school.  Now she has no income.  She will have to survive as before by cleaning the occasional house and other odd jobs.

I have gotten to know Nono since she has been the cleaner at my office.  The more I talk with her the more I like and respect her.  I find her to be a very nice person of high character with an amazing outlook on life.  She is a single mother, raising her four children on her own.  Nono is a good mother who wants the best for her children.  She is very religious, which is probably why she is able to feel joyful in the midst of her poverty.  The more I get to know Nono and the kind of person she is the more I want to help her.

Nono has asked me for money in the office a few times.  I can tell she doesn’t like asking.  Once she asked because she did not have the 3.30 Pula needed for her son to have transport to school.  If her son doesn’t pay to take a combi he has about a two hour walk — each way.  Another time, near the end of the month, but before payday, Nono asked me for 20 Pula to buy some electricity.  When she has no electricity, she has to cook for her family over a wood fire.  On those occasions I helped her, other times I have not helped her (and felt guilty later).  I didn’t want to get into the habit of just slipping her 20 Pula notes every now and then.  I am sure that she is not any more comfortable asking for a handout as I am giving one.  So I asked Nono if she would be interested in cleaning my house (for money) and she jumped at the chance.

I did not know what the going rate was for someone cleaning your house, so I asked around.  I was told 50 to 120 Pula depending on whether they have to wash clothes or not.  We do our own laundry with our washing machine and so only need cleaning.  At the office Nono’s pay on a daily basis (based on her monthly rate of 1,300 Pula), is about 65 Pula.  So I have decided to pay her 150 Pula.  I am not sure how often I will have her come clean, at least once per month, but not more than twice per month.  I feel good about hiring her.  We can afford it, it is putting money in her pocket, and our house will look nice.

2 Responses to Charity in Botswana