A Traditional Wedding in Botswana

A few weeks ago on a Thursday (weddings are ALWAYS on Thursdays) the Peace Corps staff arranged for us to attend a wedding at the Kgotla.  In Botswana there are three aspects to a wedding.  There is the “traditional” wedding, which occurs in the Kgotla on a Thursday, this is where Lobola (bride price) is paid, and the chief of the tribe (the Kgosi) officiates.  This ceremony is followed by a visit to the Council office for the legal marriage certificate, which makes it official according to the government of Botswana.  Usually two days later there is the church wedding with the bride in a pretty white dress walking down the aisle, as it is done in America.  We were allowed to attend the “traditional” ceremony. 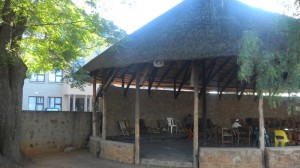 Each ward in Kanye has its own Kgotla, but the weddings are done at the “paramount” Kgotla.  The Kgosi’s of all the other wards sit at the back of the Kgotla, next to the Kgosi who has been designated as the marriage officer.

The paramount Kgosi of Kanye had given permission for us to attend, waiving certain restrictions which would have kept many of us out.  For example, this ceremony is only to be attended by married people, and many of fellow Peace Corps trainees are young and unmarried.  Another restriction which would have kept the women from attending was their dress.  For the women, traditional dress is 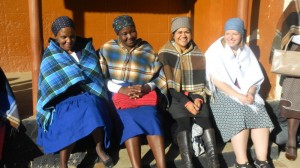 required, which means a skirt and blouse, a shawl, and a head covering.  One rule the Kgosi would not waive was the requirement that the women sit apart from the men, and on the floor.  The men had chairs to sit on, but the women sat on the hard concrete floor.

Each village has its own way of doing things.  In Kanye, the groom has to bring the cows for Lobola to the Kgotla.  I was able to see the two trailers containing the 8 cows and 1 ram.  The normal bride price in Kanye is 8 cows; if the couple has had a child out of wedlock prior to the Lobola goes up to 9 cows (the extra cow paid for “trespassing”).   Couples have to announce their wedding 21 days prior to the event.  During that time anyone who objects can make that known to the Kgosi.  A wedding cannot take place unless both sets of parents agree.  In the absence of parents there would be some other family member, grandparents, uncles or aunts, to stand in for parents and give consent.  Another difference in Kanye is that the groom is required to build a house for the couple to live in before the wedding can take place.

For the Peace Corps trainees it was fun just to have a break in the routine of training.  We had wanted to see the paramount Kgotla and the surrounding yard and buildings.  Kanye has a population in excess of 50,000, so there is a lot of business done by the chief.  Directly behind the traditional Kgotla, with its fire pit and thatched room was a modern two story building where much of this administrative work was done.  While waiting for things to begin, we wandered around and observed.  We were all dressed up, most men had ties on.  The women trainees were dressed up, two of our female trainees had been dressed appropriately by their host family mothers with a shawl and headscarf. 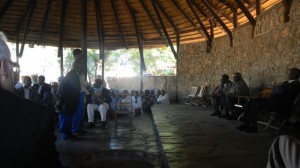 The ceremony was conducted completely in Setswana, but one of our instructors told us what to expect, and translated for us after it was over.  As is customary in all Botswana meetings it begins with a prayer.  A Motswana man rose and prayed in Setswana.  All I understood was the concluding word, “Amen.”  As the ceremony got underway, first the bride’s parents approached the Kgosi and announced that they are in agreement with the wedding, and that they approve of the groom.  They also state that 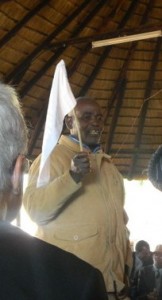 Lobola has been paid.  They also state that the groom has prepared a home for the bride.  They leave and next the groom’s father approached with a white flag, which indicates that he confirms and agrees which what the bride’s family has said.  After the wedding a white flag (perhaps the same one) would be flown over the family’s house indicating the good news of that household.

Finally the bride and groom approached the Kgosi.  The couple looked like any other couple I have seen standing before the preacher in America.  They seemed nervous and happy.  The Kgosi then spoke for about ten minutes asking the occasional question of the couple.  The Kgosi asked them how long they have been together, the answer was 2 years.  He asked where they met, and the Kgosi expressed his approval that they had met in church.  The Kgosi gave some counseling about marriage, in laws, fidelity, harmony, etc.  Exactly what you might hear in 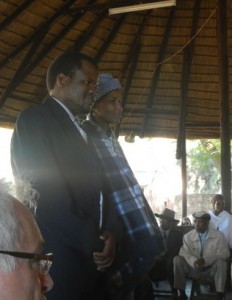 America.  Then it is done.  Another custom is observed as the Kgosi shouts out, “Pula,” and the crowd enthusiastically responds with the same word.  Then the couple walked out followed by the other people.

A few minutes later, when the marriage certificate which has been signed by the Kgosi is given to the couple who are outside of the Kgotla, the crowd is jubilant.  The women express their elation with a really interesting sound, an ululation made by moving their tongue in their mouths as they yell.  Some of the women also do a kind of dance, moving their hips as they make the sound.  You don’t have to understand Setswana to know what they are feeling.  It is a very happy moment.

Two days later, after our Site Selection Ceremony, the trainees were all headed to a nearby 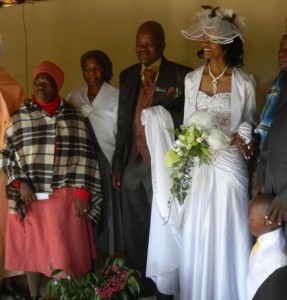 lodge called Motsi Lodge where we were planning to do a little celebrating of our own.  As Tish and I walked on the dirt road toward Motsi Lodge, a large number of cars were driving by going the same direction, honking their horns.  When we arrived we found out that, coincidentally, it was the same couple we had seen having their “traditional” wedding.  They had just left their church wedding and arrived along with their guests to take pictures at the lodge.  We were able to see them again, this time with the bride in her wedding dress.  They came through the grounds of the lodge in a procession.  Men, women and children came through, singing songs.  The women frequently would break out in that ululating sound as they danced along in the procession.  It was wonderful!

1 Response to A Traditional Wedding in Botswana